The Roman Hagara (AUT) and his Red Bull sailing team started the grand finale on a high note with a blistering win by securing the top spot in all of the three races in the 7- team field, which is taking place at Los Cabos, Mexico from 29th November to 2 December. 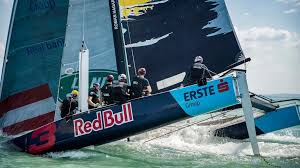 The Extreme Sailing Series is witnessing its 12thseason with this year event being a tour comprising of 8 events which will take place in the Middle East, Europe and the Americas. And this year event is expected to attract a large number of spectators.

Red Bull Sailing Team secured the 1st spot in all of the three races i.e. R1, R2, and R3 and stole the show of the first day by toppling its rivals with a margin of 5 points. The Red Bull team was followed by Oman Air and Alinghi with both securing 31 points. Although the Red Bull Sailing team stood at 5th position in 2018 series standings it has gained ground with the induction of two Olympic gold medalists namely Roman Hagara and Hans Steinacher and was further strengthened by the presence of a newbie and Micha Wilkinson. After losing the way in Muscat and Barcelona they came back strongly by improving their performance and this improvement started from San Diego which they have maintained till now. Red Bull Sailing Team’s skipper Roman Hagara said “It was very entertaining and overall, I think we had gained good speed, however, there is no place of complacency and we will try to overcome our past problems. Tomorrow we’ll come out strong and hopefully, we’ll finish it on a high note.”

The skippers of other teams have also assured that they will hit back strongly and will expect the result to be in their favor.